According to a reporter from, Kambiz Bazargan, head of the Agricultural Education and Extension Research Organization of the Ministry of Jihad Agriculture, said in a meeting with Ali Zinivand, the governor of Kerman: They have a special comparative advantage for the country

He added: Saffron, pistachios, barberry and jujube are among the products that have a special place in exports and Kerman province has a special importance in this regard.

Deputy Minister of Jihad for Agriculture, stating that Kerman is the flagship of pistachio production in the country, said: horticulture in this province has a comparative advantage in the country

Bazargan pointed out that Razi Serum Institute with five branches, one of which is located in Kerman is one of the country’s honors, clarified: Branch of Razi Serum Research Institute produces about 80% of livestock and poultry vaccines and even part of human vaccine he does

He stated: “There is a physical research complex in the Ministry of Jihad Agriculture, like other ministries, in which about 9,000 people are working in the whole country and about 2,300 faculty members.”

The head of the Agricultural Education and Extension Research Organization of the Ministry of Jihad for Agriculture, stating that 20 institutes and 34 research centers in various fields have been set up in the provinces of the country, said: “In these centers, appropriate cooperation is provided to advance the goals of the provinces.”

Bazargan added: “In this regard, good cooperation has been done with academics, but of course, the set of research that is done in the field of agriculture should be pioneering and modernization should be done in it.”

The head of the Pistachio Association said: “This year, out of 180,000 tons, the initial estimate of 100,000 tons of pistachios worth $ 600 million has been harvested from the orchards of Kerman province.”

Qader, the head of Kerman province’s customs, also said: “More than 90% of the province’s exports are pistachios and it has $ 395 million in foreign exchange for the country.”

Mirzapour, Head of Market Development Department of Iran Commodity Exchange, added: Pistachio has been included in stock exchange transactions for the past 2 years.

Kerman province with 212,000 hectares of pistachio orchards is the largest exporter of pistachios in the country and has 50 varieties of pistachios that Ahmad Aghaei, Fandooghi, Akbari and Koleghoochi are exported.

One billion dollars of pistachios were exported in 9 months

Rafsanjan – The head of the Agriculture and Food Industries Commission of the Iranian Chamber of Cooperation, pointing out that we had nearly one billion dollars in pistachio exports during the first nine months of this year, said: “This amount of currency is a source of pride.”

According to the Bazaar correspondent, Arsalan Ghasemi read the message of the head of the Iranian Chamber of Cooperatives at the opening ceremony of the Rafsanjan Pistachio Museum on Sunday noon and said: .

“According to the latest customs statistics, we had nearly $ 1 billion worth of pistachio exports in the first nine months of this year, when it was very difficult for us to provide every dollar of foreign exchange under these oppressive sanctions,” said the head of the Agriculture and Food Industries Commission. The exchange rate is the result of the efforts of farmers, producers, which is a source of pride.

Ghasemi added: “We hope to have active cooperatives in other agricultural sectors as well, so that producers and exporters and the market can gather around their common interests.”

The acting deputy governor of Kerman and a member of the Iranian Agricultural Economics Association also said on the sidelines of the opening of the Pistachio Museum and the unveiling of the book “Smiling Coin” in the Pistachio Producers Cooperative: .

Hossein Mehrabi, referring to the book “Smiling Coin” written by Mohsen Hashemi, stated: “The Iranian Agricultural Economics Association appreciates the author of this book, considering the collection of accurately documented historiography of half a century of pistachio producers’ cooperative efforts.”

He stated: The author has tried to draw the path in the formation of this institution, away from prejudices, bias and unnecessary political issues, in order to be able to create reserves for other private institutions in the country.

The Acting Deputy Governor of Kerman stated: The Agricultural Economics Association of Iran diligently considers it necessary to appreciate and thank this outstanding masterpiece that has a picture of local efforts to organize an important agricultural issue to end the culture of collective work in a brilliant way in the country.

Pistachio and the power of masculinity 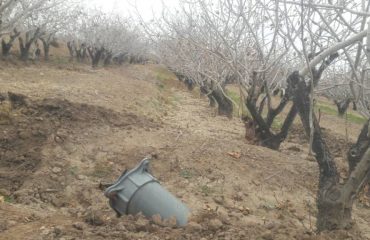